It started with the Mister Domestic Weave Along and Lillyella Undercover Maker Mat Sew Along projects on IG.  I didn't think I had time to make either but then I had the idea to combine them and of course, I can always fit one more project in. 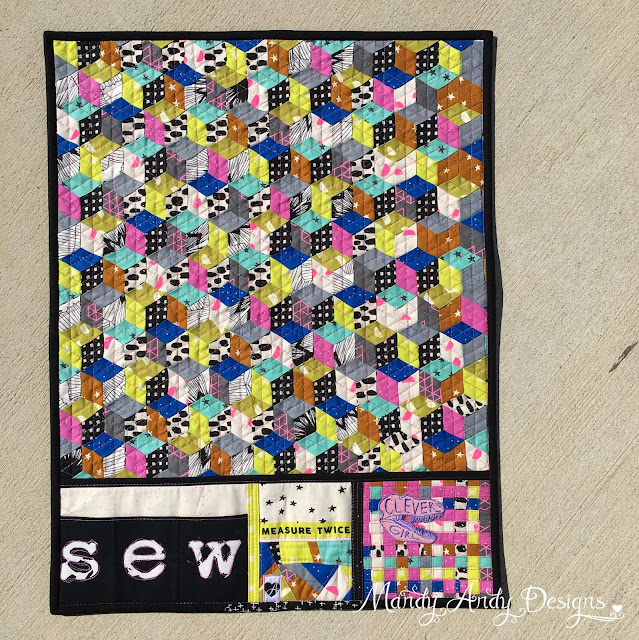 And then my daughter wanted me to make her a mini quilt because I'd made her brother one which you can see here.  We had picked the fabrics together but then I was stuck on what to do with one...until I made the Undercover Maker Mat.  So here is her mini quilt, all pinks, purples, cats and flowers... 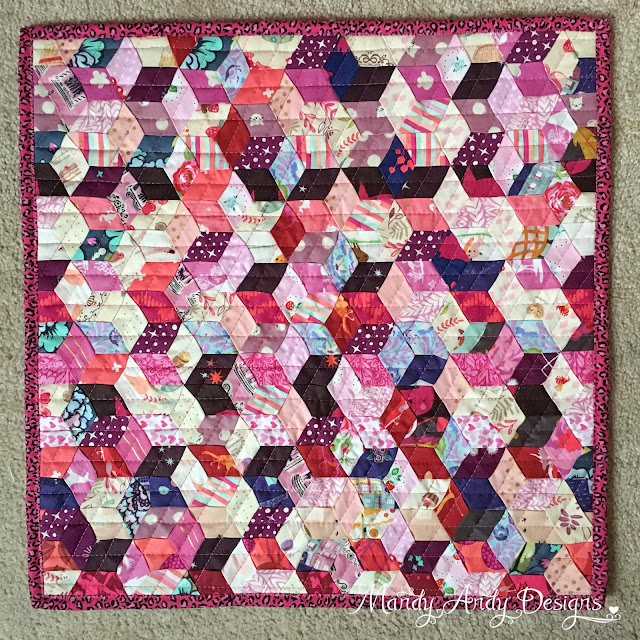 ...which led to my son asking why I didn't make his mini quilt like hers.  So I pulled his favorite colors and started here: 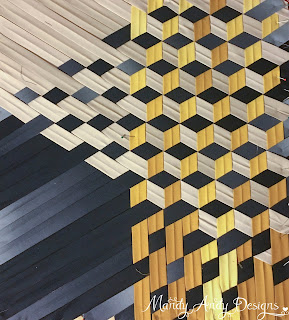 ...but  I hated it.  It was too plain for me.  In the meantime, I had made a bag for Dylan to take to his grandparents but it ended up super tiny.  I guess I should have paid more attention to what size it was but I don't typically follow patterns. I ended up seeing the Cargo Duffle Bag by Noodlehead and decided to proceed with that for something different.  I loosely followed the pattern, as is per usual and this is what I came up with. 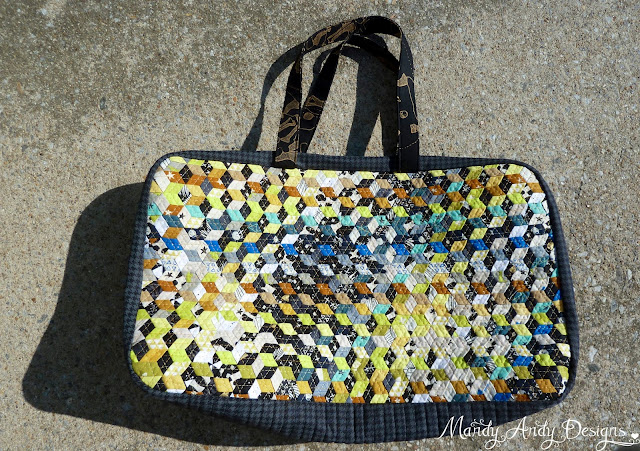 It is the tumbling blocks weave made from lots of Cotton and Steel with Kona Cotton Highlight and some V and Co Ombre and some Libs Elliott True Love Fabric.  I cut two inch strips, ironed them into 1/2 inch double fold bias strips, which makes this two sided with no need for lining on the inside. 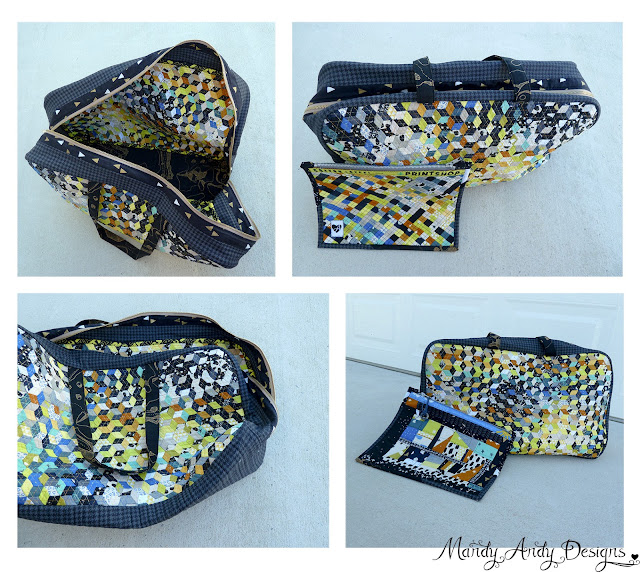 I made a matching zipper pouch out of the leftover bits from the Cargo Duffle Bag.  I improv pieced the one side and made a simple weaving on the other.  My son said that he didn't like the bag because it didn't open and lay flat.  Um, what?? Kids, right?  I think it's fabulous and want to make one with some red and pinks.

And as it turns out, I won patterns from Lillyella's Undercover Maker Mat Sew Along and then I won the whole shebang from Mister Domestic's Weave Along which included some weaving books and a set of fat quarters.  How cool is that?  I didn't even realize there were prizes with either one.  Now I'm hooked on weaving and must weave all the things.

In case anyone is interested, changes I made to the pattern are the handles, I don't really know what the pattern says, I just made them how I felt; I used a 36 inch zipper instead of the 26 inch one; I excluded the pockets for obvious reasons, how could I cover up that tumbling blocks weave; I pieced together the zipper gusset because I didn't have enough of the one fabric I wanted; I put the zipper gusset and bottom gusset together so I didn't have to add a binding to that part; I sewed everything with a 1/4 inch seam out of habit but realized too late that it was supposed to be 1/2 inch but it actually worked out by rounding the corners, which also meant making the binding on the bias, first time for that.  I think that's it.  See what I mean by loosely following a pattern? 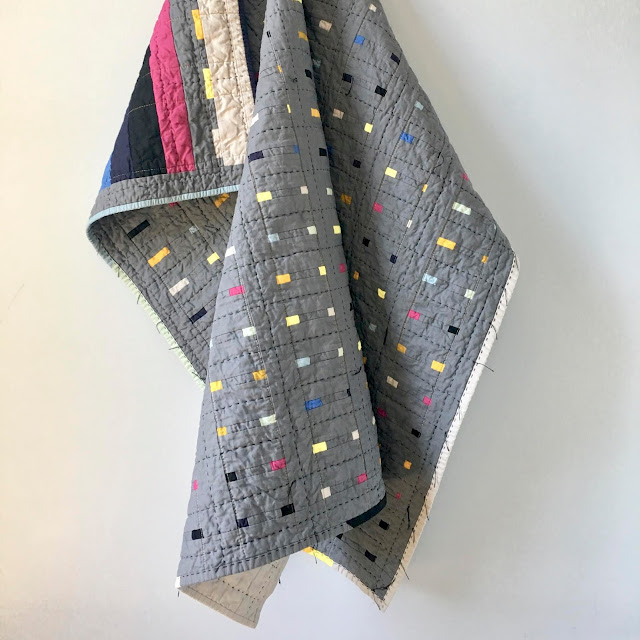 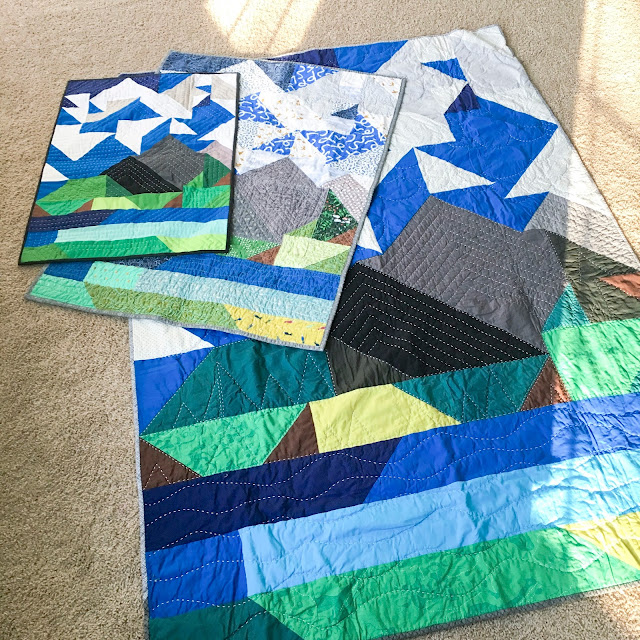